Radisson intersects 38.34 g/t gold over 2.00 m from initial exploration program to the west of the old O’Brien mine

“We are very excited to report results from our exploration program to the west of the old O’Brien Mine, an area with very limited drilling located 900 m from current resources boundary. We view initial results as very significant in that they demonstrate high grade potential in the area from mineralized zones bearing similarities to those observed in the resource area and the old O’Brien Mine. O’Brien West remains open in all direction, with results indicating strong depth continuity in lithological units identical to those observed along strike to the west, reaffirming the upside potential from approximately 2.5 km of largely untested prospective strike west of the O’Brien Mine along the prolific Larder-Lake-Cadillac break.

In addition to validating geological information from historical drill holes, initial results showcase potential for additional high-grade discoveries in this area, most notably with hole OB-21-250 intersecting 38.34 g/t over 2.00 m within only 215 m of surface and OB-21-186 intersecting 7.24 g/t over 3.20 m, approximately 85 m further west.  Drilling also highlighted the potential for good depth continuity down to 780 m with deeper holes intersecting mineralized structures.

With initial drilling significantly exceeding our expectations, our team will be working on generating new high-priority exploration targets as we look forward to systematically stepping out with the aim of extending the footprint of mineralization along the 2.5 km of prospective strike at O’Brien West. In addition, results are pending from 28,300 m of drilling in 62 holes to the east of the O’Brien Mine, of which 32 holes have visible gold occurrences. We are also currently drilling high priority deep targets below previously encountered mineralization in trend #1 and #2. We expect significant news flow in the weeks and months ahead as these results become available.” commented Rahul Paul, President and Chief Executive Officer.

1. VG denotes the presence of visible gold
2. Core length or down hole width. True widths are estimated at 70% to 80% of down hole width. To the extent possible, primary intercepts reflect minimum mining width (1.5 m true width) consistent with assumptions used in the 2019 resource estimate.
3. Assay grades shown uncapped. A capping factor of 60 g/t Au was used in the 2019 resource estimate. 4. For a full listing of drill results from current drilling program click here.

Results from an initial 5,700 m exploration campaign west of the old O’Brien mine demonstrate the high-grade potential along the largely untested 2.5 km strike length to our western claim boundary, an area that does not currently contribute to resources. This campaign was successful at validating historical drill data, enhancing our geological interpretation of the sector and confirming the expansion potential along strike and at depth. Results obtained to date suggest the potential to discover new high-grade enrichment vectors and in turn meaningfully drive resource expansion in the future.

These encouraging results also appear to confirm the high-grade potential in the area, most notably with drill hole OB-21-250 intersecting 38.34 g/t over 2.00 m. While some drill holes returned lower gold assay values, initial drilling has traced mineralized zones down to 780 m vertical depth. This includes OB-21-254 which intersected mineralized structures with visible gold occurrences below the above intercept and hole OB-21-190 which suggests that mineralized structures likely extend to greater depths.

The company is currently integrating the data into the litho-structural model to generate new high-priority exploration targets and to better define the geometry of mineralized zones and gold-bearing structures.

Drilling to date has continued to define and expand four high-grade mineralized trends, located approximately 300 m, 600 m, 900 m and 1,200 m respectively to the east of the old O’Brien Mine. Mineralized trends identified bear similarities with structures previously mined at O’Brien down to a depth of 1,100 m (historical production of 587 koz grading 15.25 g/t). 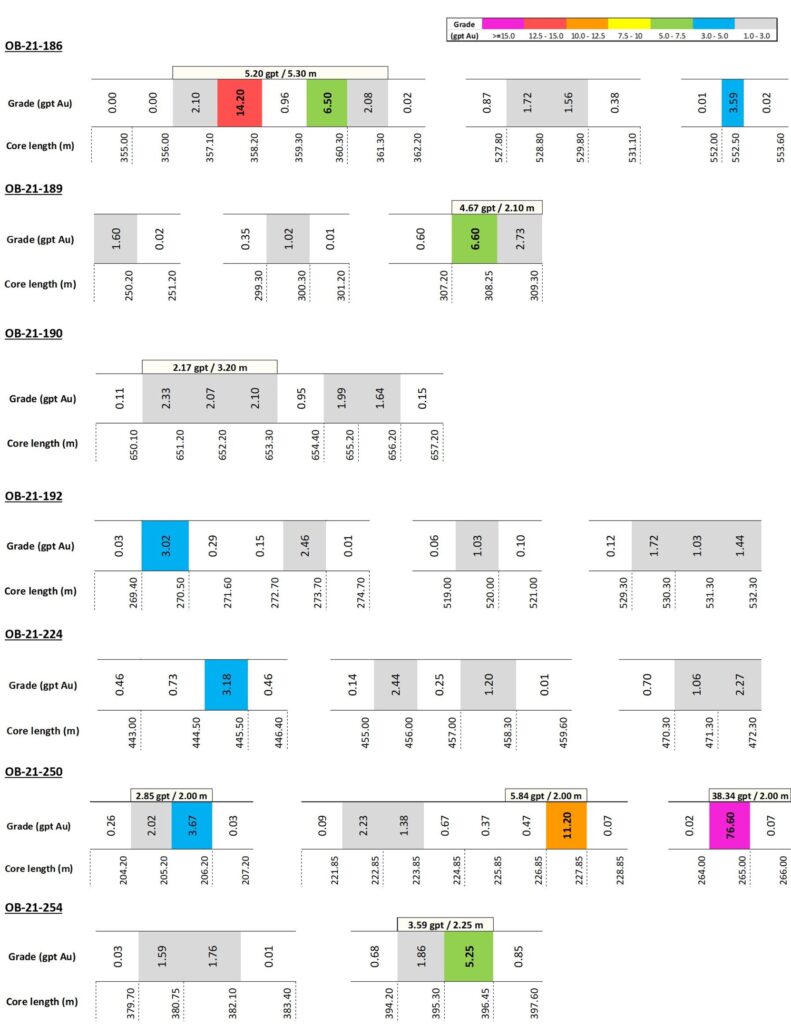 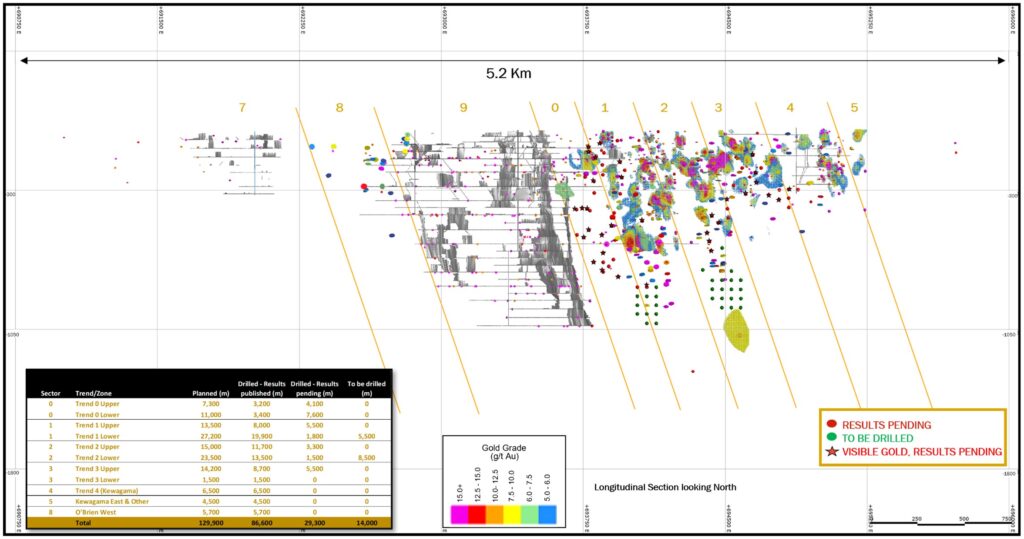 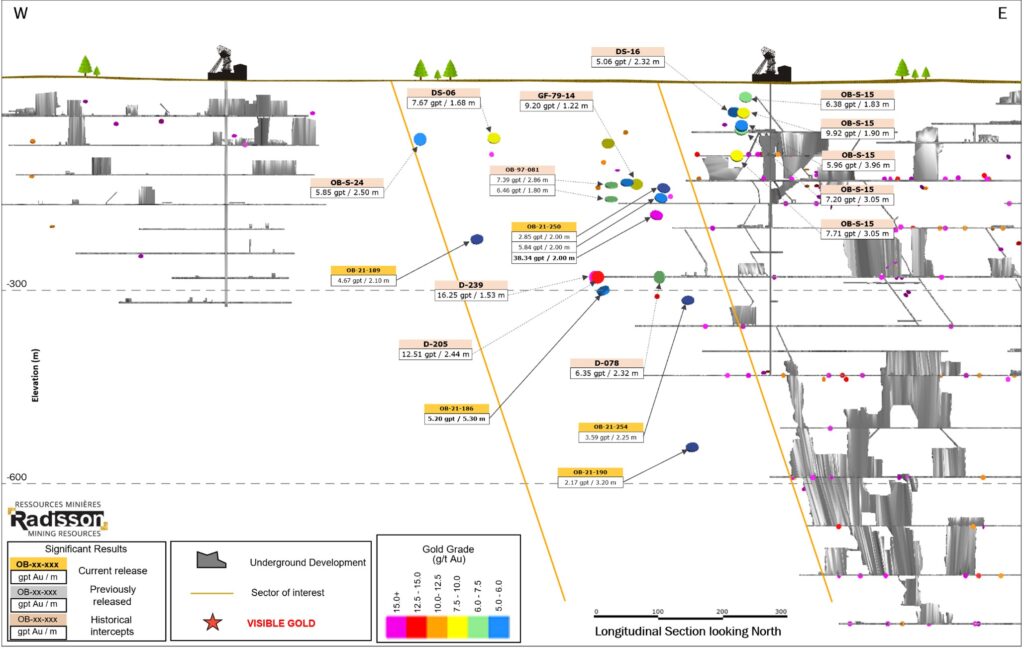 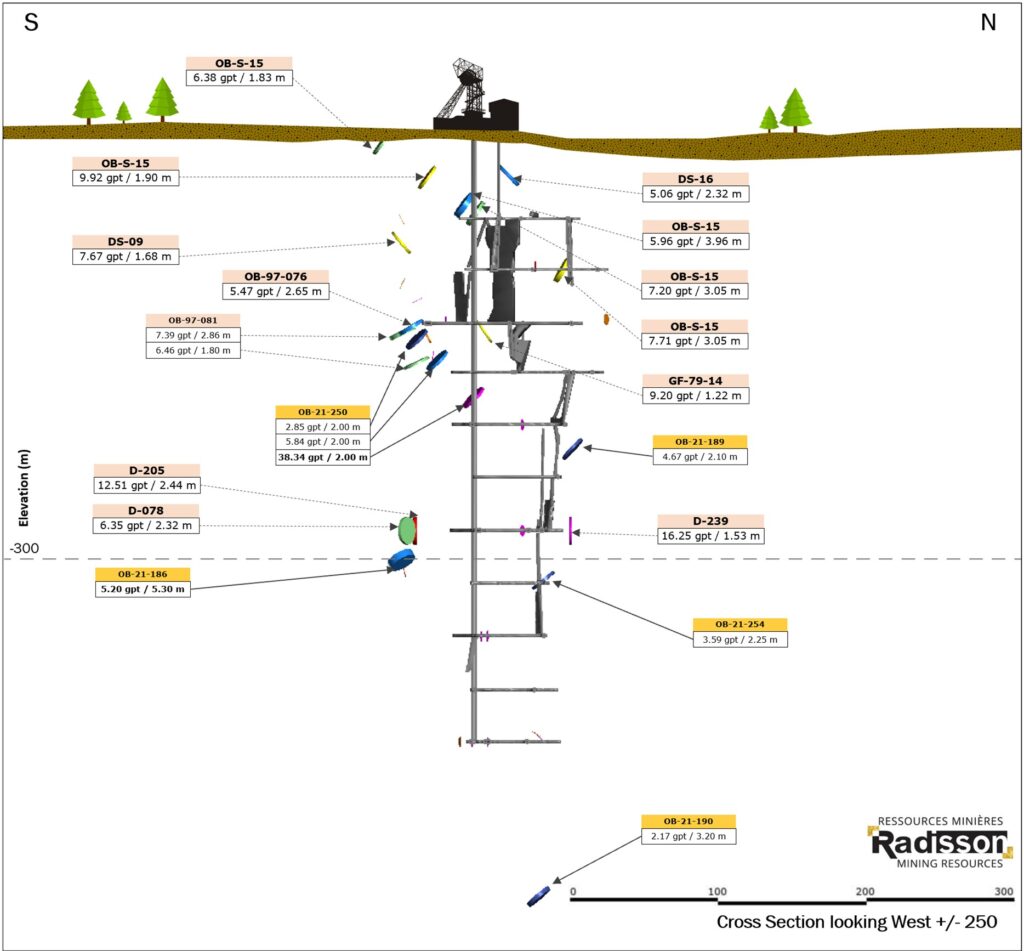 Nicolas Guivarch, M. Sc., P.Geo., Senior Geologist – Technical Services is the qualified person pursuant to the requirements of NI 43-101, and have reviewed and approved the technical disclosure in this press release.

Radisson announces results of its Annual General Meeting of Shareholders