Radisson Mining Resources Inc. (TSX-V: RDS, OTC: RMRDF): (“Radisson” or the “Company”) is pleased to announce significant high-grade gold intercepts from the ongoing 60,000 m exploration drill program at its O’Brien gold project located along the Larder Lake Cadillac Break halfway between Rouyn-Noranda and Val-d’Or in Quebec, Canada (See figure 1 and 2). As announced previously, the program resumed on May 11th, after having paused on March 24th, in response to Government of Quebec orders related to the COVID-19 pandemic.

“Drilling at O’Brien has continued to deliver excellent results. The initial part of our program was successful in demonstrating strong continuity of high-grade mineralization in the 36E and F zones down to a depth of 950 m, and within a mineralized trend similar to that historically mined at O’Brien. This area remains a high priority target for us, with assays pending for holes OB-19-98W1 and OB-19-98-W2, which intersected visible gold in mineralized zones to the west of and above a previously released intercept of 66.71 g/t over 4.70 m.

We are also pleased that recent drilling has demonstrated the potential for a second mineralized trend to the east, largely untested below 400 m. In particular, hole OB-20-124 returned 8.35 g/t Au over 6.00 m (incl. 10.33 g/t over 3.00 m) intersecting what appears to be high-grade cross cutting structures in a largely untested area, and highlighting a potential second steeply dipping trend approximately 300 m east of the high-grade trend defined in the 36E Zone.

In addition, OB-19-111W2 intersected 13.86 over 2.10 m (incl. 41.00 g/t Au over 0.70 m), 45 metres below a previously released intercept of 26.42 g/t Au over 2.05 m (in hole OB-19-111), both intercepts near the western boundary of resources defined in the F Zone. These holes, along with historical high-grade intercepts highlight an opportunity to add resources in the gap between current resources and the old O’Brien mine.

Results released so far represent only ~35% of our planned 60,000 m program and we look forward to further drilling these high potential areas in the coming weeks. With results continuing to validate our litho-structural model, we are increasingly confident we can meaningfully grow resources with upcoming drilling in what appears to be a target-rich environment. We are pleased to have our exploration team onsite at O’Brien again, to resume our fully funded drill campaign and look forward to releasing additional results in the coming weeks.” commented Mario Bouchard, President and CEO. 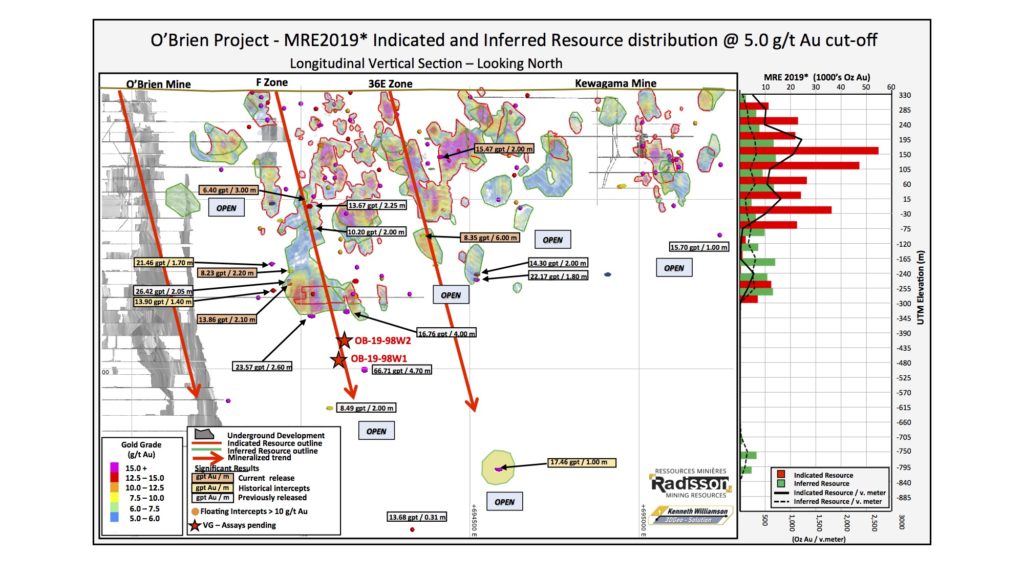 1. VG denotes the presence of visible gold
2. Core length or down hole width. True widths are estimated at 70% to 80% of down hole width. To the extent possible, primary intercepts reflect minimum mining width (1.5 m true width) consistent with assumptions used in the 2019 resource estimate.
3. Assay grades shown uncapped. A capping factor of 60 g/t was used in the 2019 resource estimate
4. Table includes only intercepts that meet 5 g/t cut-off and minimum mining width constraints used in the 2019 MRE. Complete assay data available at www.radissonmining.com 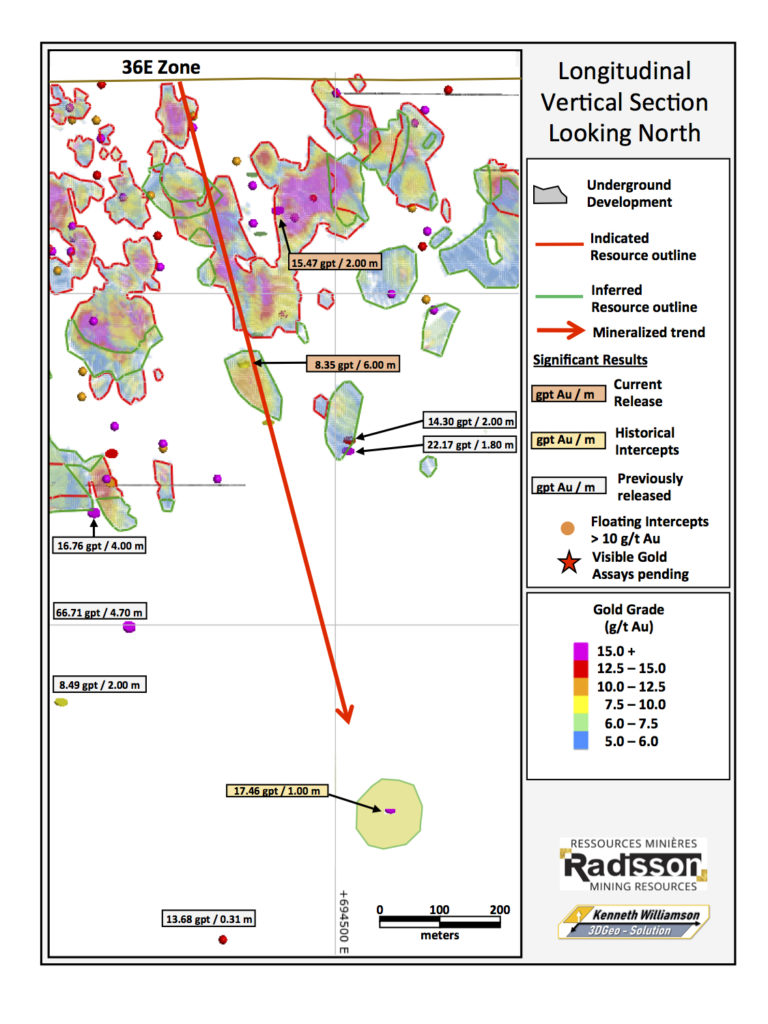 Results from hole OB-20-124, in conjunction with other recent results, appears to be defining a second high-grade steeply dipping mineralized trend located approximately 300 m east of the high-grade trend defined down to a vertical depth of 950 m on 36E and F zones.. While resources in this area are largely limited to the upper 400 m, results from the ongoing campaign indicate a trend that links above high-grade resources up to 175 m further down plunge. These results include the one from OB-20-124 published today, as well as 14.30 g/t Au over 2.00 m and 22.17 g/t Au over 1.80 m (Hole OB-19-106). There are indications that the trend could extend deeper to 1,100 m where a historical intercept returned 17.46 g/t Au over 1.00 m. A recent deeper hole OB-20-113 drilled down to approximately 1,300 m intersected the same structures but missed the intended target since it deviated at depth. Overall results to date suggest strong exploration potential below 400 m for this sector and additional drilling is planned in the coming weeks.

Hole OB-19-111W2 returned 41.00 g/t Au over 0.70 m with the last assay. The results of the remaining two metres of this hole are pending. . The gap area between the old O’Brien Mine and the F-Zone does not materially contribute to the current resource estimate and remains open below 250 m. The high-grade intercepts in holes OB-19-111 and OB-19-111W2 were near the western boundaries of inferred resource blocks in the F-Zone. These results along with a few historical intercepts (not included in the current resource), suggest the potential to add high-grade resources in this area, which remains largely untested. Additional drilling is planned in this gap representing a strike length of approximately 200 m that has no resources below 250 m. Additional drill targets are being refined on this sector and will be addressed in coming months.

One drill rig is currently active on the Lower 36E area, which remains a high priority target for resource expansion. While current resources are largely limited to 600 m vertical depth, deeper drill holes including OB-19-92W2b (66.71 g/t over 4.70) and OB-19-98 (8.49 g/t over 2.0 m) have highlighted the potential for a high-grade mineralized trend down to a depth of 950 m. Assays are pending for two wedge holes drilled to establish continuity of high-grade mineralization and to target resource growth in this area. Holes with assays pending include OB-19-98-W1, which intersected visible gold (see photo) within a mineralized zone in the targeted structures, 75 m west of OB-19-92W2b and 100 m above OB-19-98. Assays are also pending for OB-19-98W2, which intersected significant visible gold within a smoky quartz vein (see photo 1 and photo 2), approximately 75 m above OB-19-98-W1 and a similar distance (85m) below previously announced intercept of 16.76 g/t over 4.00 m (OB-19-101). An additional wedge hole is currently being drilled from OB-19-98, to be followed up with a possible fourth wedge. Following completion of these wedges, additional drilling is planned to the west below previously released hole OB-19-107 that returned 23.57 g/t over 2.60 m (within a broader intercept of 8.29 g/t over 9.00 m). With mineralization open for expansion at depth below 950 m and along strike to the east/west, the company expects this highly prospective area to remain a key focus of exploration in the coming months. 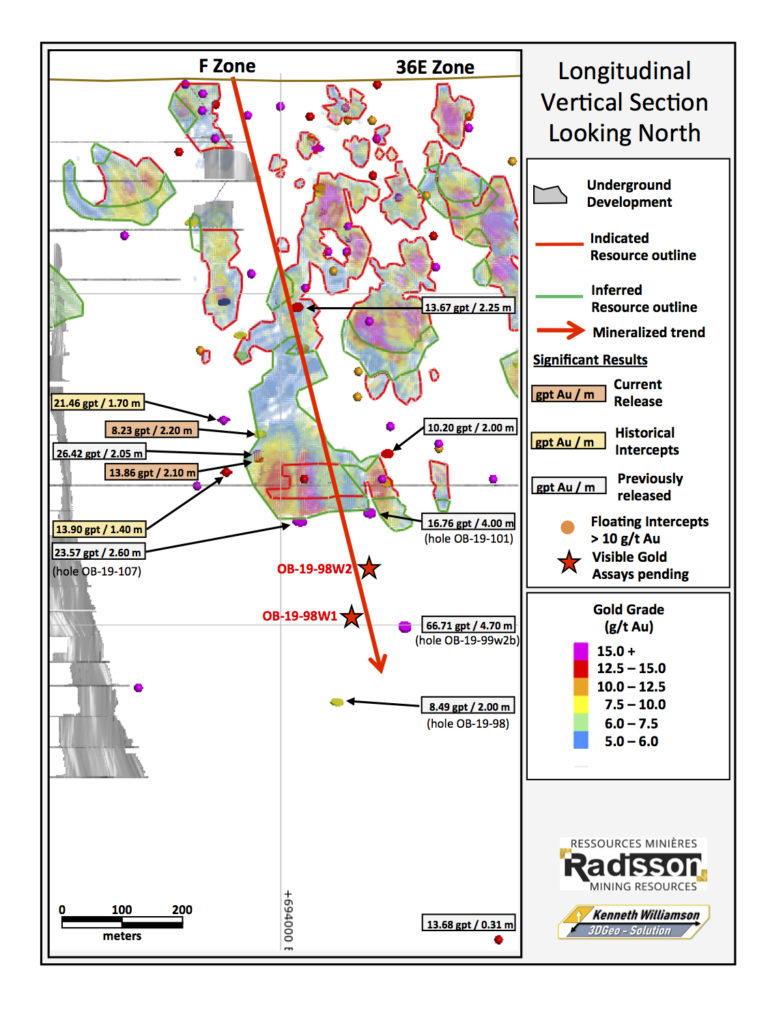 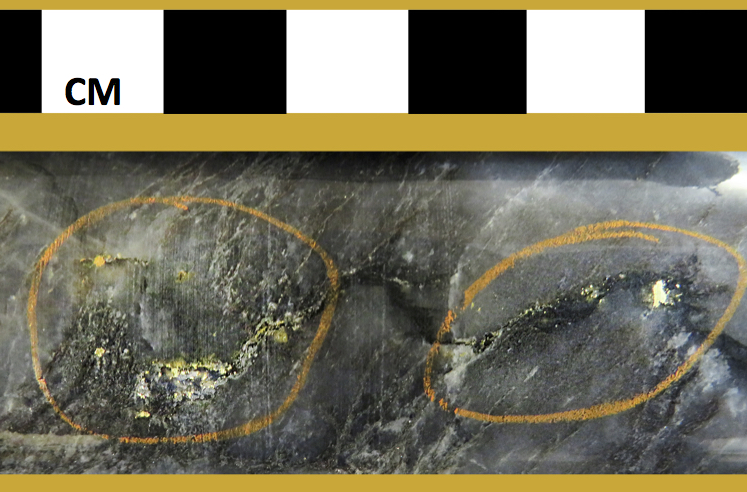 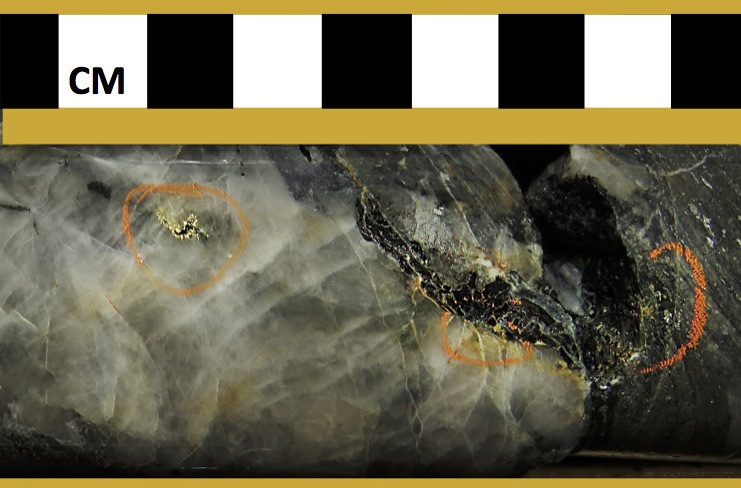 1. VG denotes the presence of visible gold
2. Core length or down hole width. True widths are estimated at 70% to 80% of down hole width. To the extent possible, primary intercepts reflect minimum mining width (1.5 m true width) consistent with assumptions used in the 2019 resource estimate.
3. Assay grades shown uncapped. A capping factor of 60 g/t was used in the 2019 resource estimate
4. Table includes only intercepts that meet 5 g/t cut-off and minimum mining width constraints used in the 2019 MRE. Complete assay data available at www.radissonmining.com


The Vintage zone is parallel to the more advanced zones at the O’Brien project located approximately 85 meters north of the Cadillac Break in the Cadillac Group. The Vintage Zone has seen less drilling historically and its contribution to the current resource estimate is small. A s part of this program, a total of 3,153 m of drilling has been drilled at the Vintage zone aimed at better understanding the geology and collecting information to refine the model. A number of known mineralized zones/structures were intersected and their continuity was demonstrated. Additional drilling will likely be required in the future to better understand this area and the resource potential.