Radisson Mining Resources Inc. (TSX-V: RDS, OTC: RMRDF) (“Radisson”) and Renforth Resources Inc. (CSE – RFR) (OTC US– RFHRF) (WKN – A2H9TN) (“Renforth”) are pleased to announce the closing of the previously announced New Alger Project (“New Alger”) acquisition by Radisson from Renforth.  The New Alger acquisition is part of a long-term strategic relationship between the two companies that will include an investment by Radisson into Renforth, resulting in Radisson owning 9.6% interest in Renforth, while Renforth will own 5.7% interest in Radisson.  The Renforth financing is expected to close within the coming month.  The relationship aims to leverage regional synergies and unlock significant value for shareholders of both companies from one of the most prospective mining camps in the world.

The transaction will significantly expand Radisson’s claims in the Bousquet-Cadillac mining camp, which will create scale, and which Radisson believes will enhance its exploration potential and increase O’Brien’s appeal to investors and larger producers. With the close of the New Alger acquisition,

In addition, the deal significantly bolsters Renforth’s balance sheet and allows for a significant expansion in planned exploration spending aimed at realizing the full potential of its attractive project portfolio that includes Parbec, Nixon Bartleman, Malartic West, Surimeau and Denain-Pershing. Following close of the Renforth financing, Radisson will hold a 9.6% equity stake in Renforth providing Radisson shareholders with exposure to Renforth’s attractive portfolio of assets in one of the most prolific gold camps in the sector.

Mario Bouchard, Chief Executive Officer of Radisson Mining Resources Inc. commented “We are delighted to have closed this transaction and look forward to our partnership with Renforth. We believe the transaction significantly increases the attractiveness of the O’Brien project. Radisson’s claims now cover a very prospective land package including an approximate 6 km strike length along the prolific Cadillac Break, comprising almost 3km to the east and west of the old O’Brien Mine, which has historically been the highest-grade gold mine in Quebec.  We look forward to expanding our exploration program to include the newly acquired claims”

Radisson anticipates that its strong cash position will be sufficient to both complete the transaction and to expand the ongoing drill program to include the newly acquired claims. As of July 31, 2020, the company estimates a total liquidity position of approximately $8.5 million including,

Pursuant to the New Alger transaction, Renforth and Radisson have agreed that shares of each party will be subject to mutual lock-up restrictions. Neither party will sell securities of the other party for a period of 12 months after closing without the prior consent of the other party. After that time, any party wishing to sell will give the other party a period of time to facilitate transfers in the shares. These limitations will remain in place until the third anniversary of the closing date.

Location Map of the New Alger and O’Brien properties 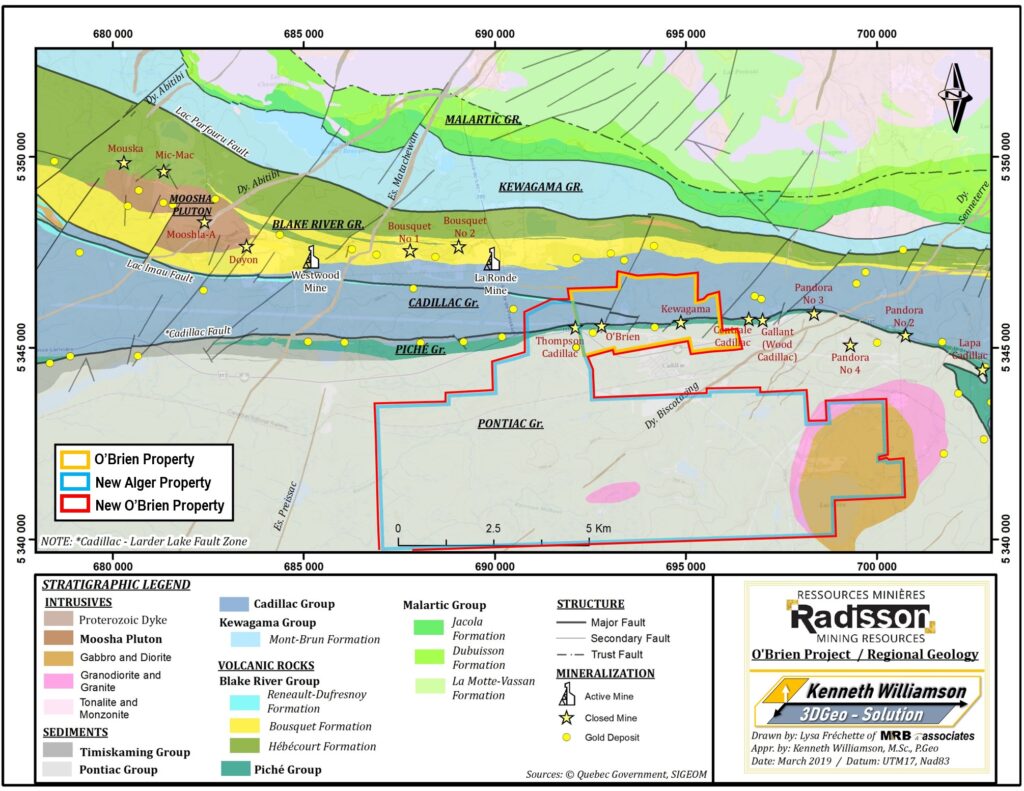 The New Alger Project is a highly prospective land package adjacent of Radisson’s O’Brien Project to the west and along strike; In June 2020, Renforth Resources published an Updated Mineral Resource Estimate and Technical Report. The current resource covers a strike extent of approximately 1400 m and an average depth extent of approximately 300 m on the Cadillac Break. The deposit remains open at depth both on the Cadillac Break and the Discovery Veins, and along strike to the east and west on the Discovery Veins.

Richard Nieminen, P. Geo, Exploration Manager, is a Qualified Person as defined in National Instrument 43-101 and has reviewed and approved the technical information in this press release relating to Radisson.

Radisson is a gold exploration company focused on its 100% owned O’Brien project, located in the Bousquet-Cadillac mining camp along the world-renowned Larder-Lake-Cadillac Break in Abitibi, Québec. The Bousquet-Cadillac mining camp has produced over 21,000,000 ounces of gold over the last 100 years. The project hosts the former O’Brien Mine, considered to have been the Abitibi Greenstone Belt’s highest-grade gold producer during its production period (1,197,147 metric tons at 15.25 g/t Au for 587,121 ounces of gold from 1926 to 1957; 3D Geo-solution, July 2019).

On behalf of Radisson

Certain information contained in the press release are subject to receipt of all regulatory approvals. Neither the TSX Venture Exchange nor its Regulation Services Provider (as that term is defined in the policies of the TSX Venture Exchange) accepts responsibility for the adequacy or accuracy of this release. No securities regulatory authority has approved or disapproved of the contents of this news release.

All statements, other than statements of historical fact, contained in this press release including, but not limited to, those relating to the acquisition, its intended effects, timing of completion of the acquisition of New Alger and the Renforth financing, the development of the O’Brien project, anticipated exploration activities and generally, the above “About Radisson Mining Resources Inc.” and “About Renforth Resources Inc.” paragraphs which essentially describes the Corporation’s outlook, constitute “forward-looking information” or “forward-looking statements” within the meaning of applicable securities laws, and are based on expectations, estimates and projections as of the time of this press release. Forward-looking statements are necessarily based upon a number of estimates and assumptions that, while considered reasonable by the Corporation as of the time of such statements, are inherently subject to significant business, economic and competitive uncertainties and contingencies. These estimates and assumptions may prove to be incorrect. Many of these uncertainties and contingencies can directly or indirectly affect, and could cause, actual results to differ materially from those expressed or implied in any forward-looking statements and future events, could differ materially from those anticipated in such statements. A description of assumptions used to develop such forward-looking information and a description of risk factors that may cause actual results to differ materially from forward looking information can be found in disclosure documents issued by Radisson and Renforth on the SEDAR website at www.sedar.com.