Radisson expands the ongoing drill program at O’Brien to 11,000 M and announces results from the historical drill core re-logging and assaying program

Rouyn-Noranda, Quebec Radisson Mining Resources Inc. (TSX-V: RDS, OTC: RMRDF) (“Radisson” or the “Company”) is pleased to announce an update on the exploration program underway at the O’Brien gold project located along the Cadillac Break, halfway between Rouyn-Noranda and Val-d’Or in Quebec, Canada. Results from the 6,000 m drill program that will be completed in the coming days on the Vintage Zone of the O’Brien gold project are pending.

Following the resource estimate update resulting into a 95% increase in the Indicated resources at the O’Brien gold project (See March 20, 2018 Press release), the company announces the expansion of the ongoing drill program to 11,000 meters with a principal focus on the F Zone.

• A 4,000 m drill program was defined on the F Zone of the O’Brien project, a sector that was not incorporated into the resource estimate update published in March 2018. Due to its proximity to the 36E area and the drilling results obtained on the F Zone during 2016-2017 drilling campaigns, the company evaluates the F Zone represents an excellent growth opportunity at O’Brien. (See composite longitudinal view)
• 2 drill holes that intersected visible gold on the F Zone are currently being assayed for approximately 934 m.
• Following reception of the 3D model and results from the historical drill core re-logging and assaying program, an enrichment vector dipping 75 degrees east was defined on 36E area. (See 3D metal factor section of the Piché Group looking northeast)
o Radisson defined a 1,200 meters drill program in order to target the possible extension of this vector towards surface.
• Current work will allow the company to define a drill program below depth of 550 meters where all sectors of the O’Brien gold project remain open.

Mario Bouchard, President and CEO commented: “The expansion of the drill program once again supports the excellent exploration potential lying at the O’Brien project. We’re excited to expand the drill program on the F Zone, which could allow the increase of mineral resources at O’Brien. As expected, the Vintage Zone drill program will be completed shortly increasing our geological knowledge of the area. Exploration work realised at O’Brien are still very shallow, the known information and the Old O’Brien historic production supports the exploration potential at depth below 550 meters. The 3D model will help our team in optimizing the success of its work for the next steps of exploration and development of the O’Brien project”.

The F Zone is contiguous and to the West of 36E area and extends up to the old O’Brien mine. Results obtained from the 2016-2017 drilling program allowed to define the vertical and lateral extension of historical mined stopes on the F Zone (See 20.2 g/t Au over 2.5 m and 11.9 g/t Au over 3 m). Due to lack of 3D information from former mining infrastructures of the F Zone, this sector was not incorporated in the resource estimate update published on March 20, 2018. (See Radisson announces 95% increase in Indicated resources at O’Brien).

Following the resource estimate update, the company started 3D modelling of former mining infrastructures of the F Zone. The geological team also established a 4,000 meters drill program with main objective of building 43-101 compliant resources in a future resource estimate update for the O’Brien gold project. Two drill holes were completed therein, including one at the boundary of the 36E area.

In light of the wide zones of mineralization intersected in 2017 on 36E area, the company completed the review from a series of historical drill holes in the near-surface area of the 36E zone. Prior to 2016, most of these holes had incomplete assay within the Piche group sequence. Only highly mineralized zones were assayed without paying attention to a possible wider low-grade envelope model. Results obtained allowed to define an enrichment vector dipping 75 degrees to the east. The 1,200 m drill program will fill the geological information gap of this area near surface. This interpretation will also be useful in order to define a drill program below the 550 m level where all areas of the O’Brien project are open. Only four drill holes aimed the vertical extension of the 36E area at depth, with one them returning 17.5 g/t Au over 1 meter at 1,228 m depth along hole. The historical information available and the Old O’Brien mine production ranging down to a vertical depth of 1,100 m, supports the exploration potential lying in vertical extension of the known mineralized zones.

Results are presented as down hole width; true widths are estimated between 55 to 70% of down hole thickness.
Assays results have been capped to 60 g/t Au for DDH OB-97-102. 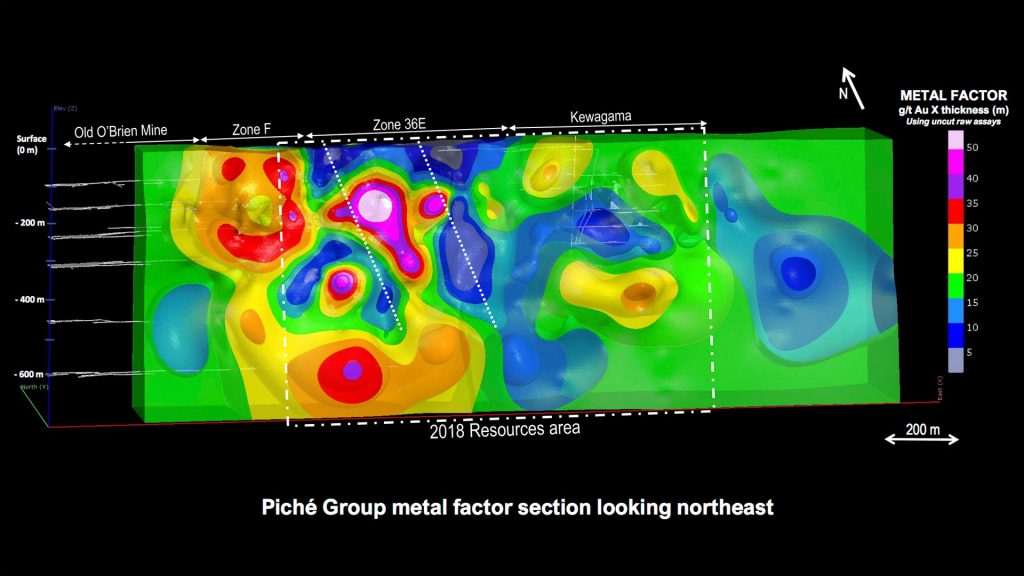 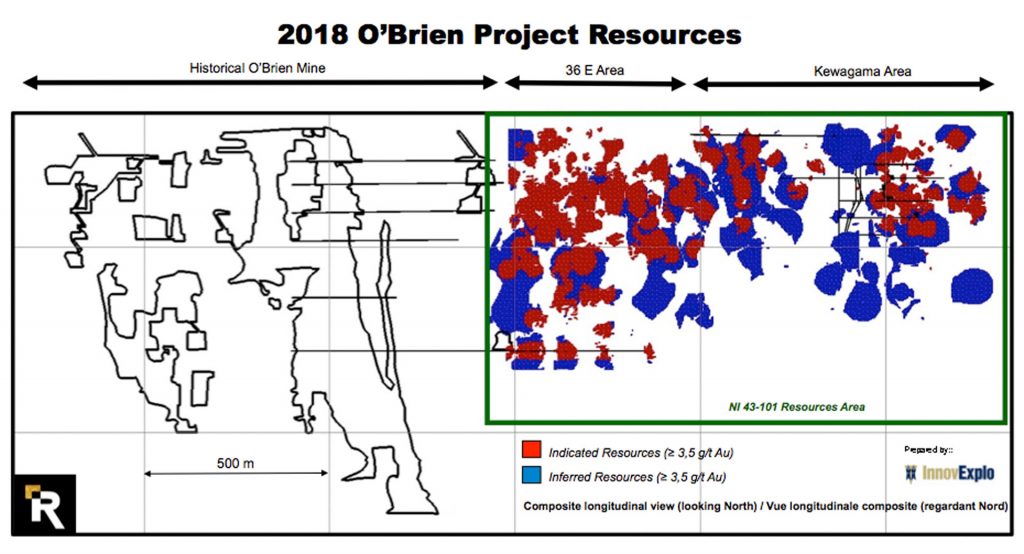 All drill cores in this campaign are NQ in size. Assays were completed on sawn half-cores, with the second half kept for future reference. The samples were analyzed using standard fire assay procedures with Atomic Absorption (AA) finish at Swastika Laboratories Ltd, in Swastika, Ontario. Samples yielding a grade higher than 5 g/t were analyzed a second time by fire assay with gravimetric finish at the same laboratory. Samples containing visible gold were analyzed with metallic sieve procedure. Standard reference materials and blank samples were inserted prior to shipment for quality assurance and quality control (QA/QC) program.

Catherine Jalbert, P. Geo, acts as a Qualified Person as defined in National Instrument 43-101 and has reviewed and approved the technical information in this press release.

Radisson is a Quebec-based mineral exploration company. The O’Brien project, cut by the regional Cadillac Break, is Radisson’s flagship asset. The project hosts the former O’Brien Mine, considered to have been the Abitibi Greenstone Belt’s highest-grade gold producer during its production (1,197,147 metric tons at 15.25 g/t Au for 587,121 ounces of gold from 1926 to 1957; InnovExplo, April 2015).