Rouyn-Noranda, Quebec Radisson Mining Resources Inc. (TSX-V: RDS, OTC: RMRDF) (“Radisson” or the “Company”) is pleased to announce that hole OB-17-49 has successfully extended the Vintage zone by additional 250 meters (“m”) at depth at the O’Brien gold project. The project is located along the Cadillac Break halfway between Rouyn-Noranda and Val-d’Or in Quebec, Canada. The Vintage zone is parallel to, and to the north of bulk of current resources at the O’Brien project. The zone is located only 85 meters north of the Cadillac Break in a context that is similar to producing and historical mines in the Cadillac mining camp.

• The Vintage Zone has been traced over a strike length of 325 meters and vertical depth of up to 580 meters.

Mario Bouchard, President and CEO commented: “Current exploration results continue to increase the overall dimension of the Vintage Zone. Vintage remains open in all directions. We are also encouraged to see that mineralization could also be widening at depth in a Banded Iron formation encountered at 580 meters depth. Due to its high grade potential and proximity to current resources, the Vintage Zone has the potential to be an important part of O’Brien’s exploration and development plan. The team is currently planning a second phase drill program that could start as early as November on Vintage.”

Plan view of the Vintage Zone 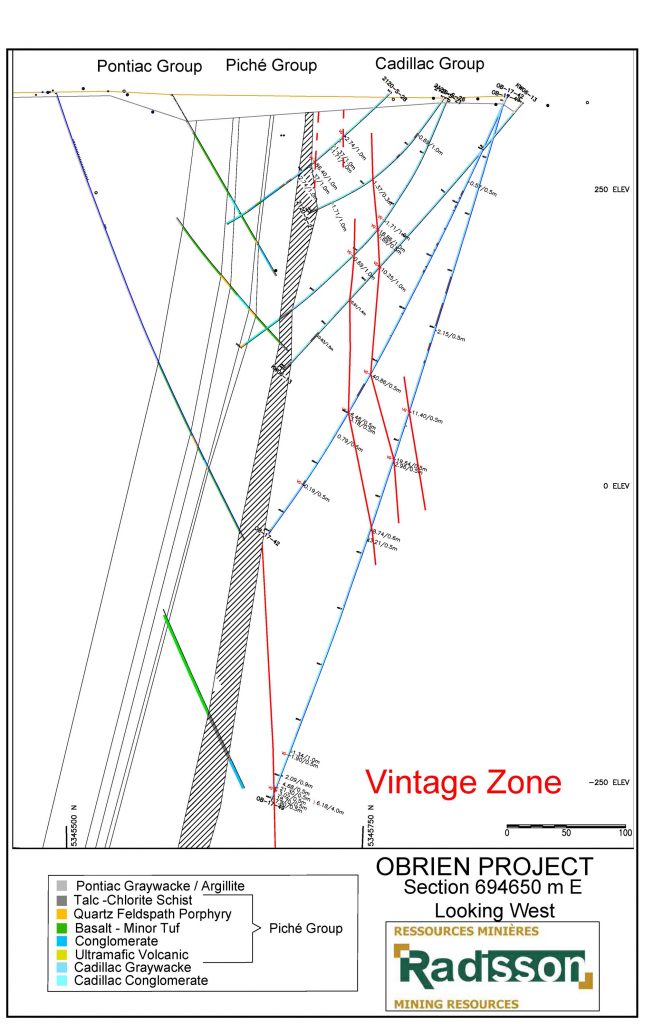 *VG; Denotes presence of visible gold
Note; Results are presented as down hole width; true width are estimated between 55 to 70% of down hole thickness.

The Vintage zone is a parallel zone of the O’Brien project located approximately 85 meters north of the Cadillac Break in the Cadillac Group of meta-sediments comprising sequence of polymictic conglomerate, banded iron formation (BIF) and grauwacke. In comparison, current resources of 36E and Kewagama zones are located in the Piche Group, south of the Cadillac Break. The Vintage zone saw small historical exploration programs, which were never followed upon. In 2017, the company established several high-priority exploration drill targets through historical data compilation in this area of the O’Brien gold project. The first seven drill holes that tested these targets were completed over a strike length of 325 meters and up to 580 meters depth. The new info added to the few available historical information helps to demonstrate the continuity and the favourable geometry of the Vintage zone. All intercepts remain open in all directions.

All drill cores in this campaign are NQ in size. Assays were completed on sawn half-cores, with the second half kept for future reference. The samples were analyzed using standard fire assay procedures with Atomic Absorption (AA) finish at Swastika Laboratories Ltd, in Swastika, Ontario. Samples yielding a grade higher than 5 g/t were analyzed a second time by fire assay with gravimetric finish at the same laboratory. Samples containing visible gold were analyzed with metallic sieve procedure. Standard reference materials and blank samples were inserted prior to shipment for quality assurance and quality control (QA/QC) program.

Tony Brisson, P. Geo, independent consultant, acts as a Qualified Person as defined in National Instrument 43-101 and has reviewed and approved the technical information in this press release.

Radisson is a Quebec-based mineral exploration company. The O’Brien project, cut by the regional Cadillac Break, is Radisson’s flagship asset. The project hosts the former O’Brien Mine, considered to have been the Abitibi Greenstone Belt’s highest-grade gold producer during its production (1,197,147 metric tons at 15.25 g/t Au for 587,121 ounces of gold from 1926 to 1957; InnovExplo, April 2015).