Radisson reports multiple high-grade intercepts including 37.86 g/t Au over 2.00 m and 12.69 g/t Au over 3.50 m, expanding mineralization laterally and at depth in the gap between current resources and the old O’Brien Mine

“The first batch of results from directional drilling completed as part of the ongoing program highlight the significant high-grade potential along trend #0, which represents the gap between currently defined resources along trend #1 and historically mined structures at the old O’Brien Mine. Drill results to date demonstrating the continuity of high-grade mineralization down to more than 750 m depth and up to 140 m west of current resources established on Trend #1. Drill results from this sector have been impressive, with 36 holes published so far of which 20 have intersected visible gold including 14 intercepts grading over 5 g/t Au.

Overall, results from our ongoing 130,000 m drill program continue to impress with 195 holes published so far including 131 intercepts grading over 5 g/t Au. We look forward to obtaining additional results from all 5 high-grade trends (trend 0, 1, 2, 3, 4) established east of the old O’Brien mine as we continue to focus on expanding the footprint of the deposit. Results are pending from 50 holes of which 27 have intersected visible gold occurrences. Pending results include approximately 10,000 m (17 holes) from our deep directional drill program aimed at testing some of our most promising deeper targets along trend #1 and #2. Our deep directional drill continues to remain a key priority with two rigs systematically testing deeper high-grade mineralized structures along trend #1 and #2. We look forward to building momentum with significant news flow in the weeks and months ahead” Commented Rahul Paul, President and Chief Executive Officer. 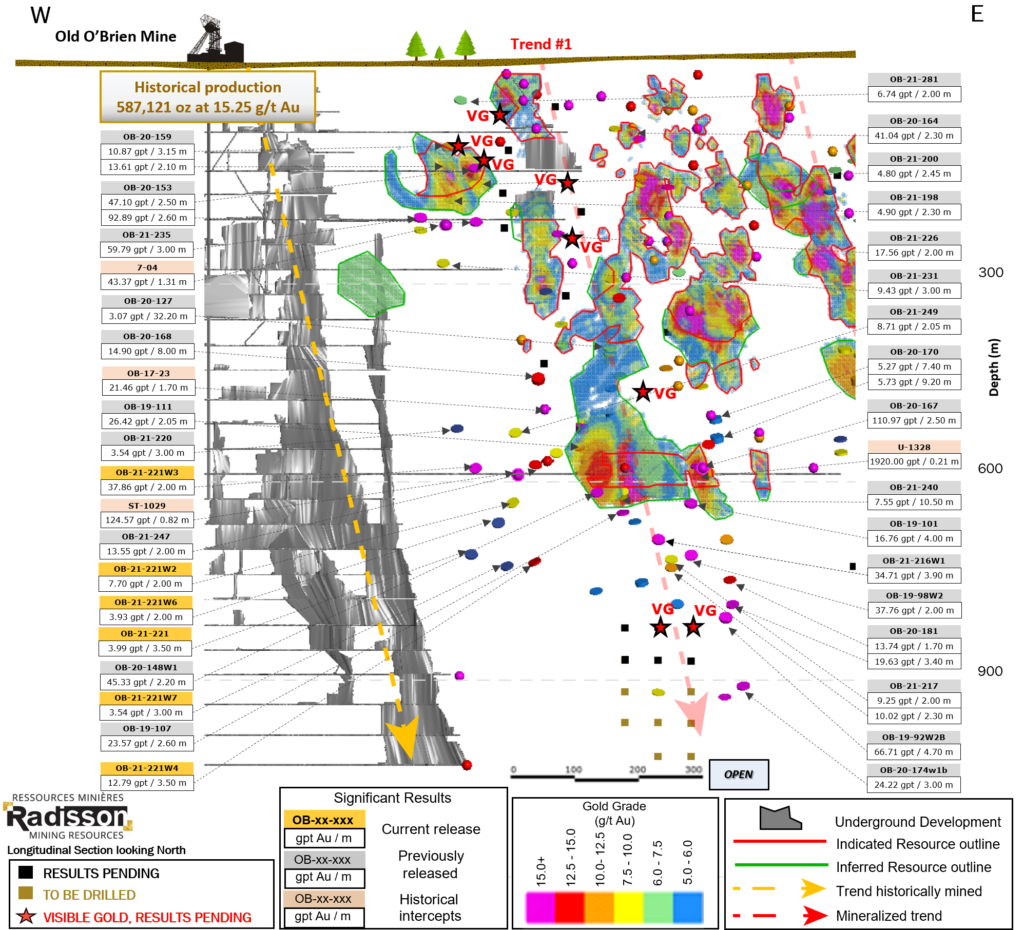 1. VG denotes the presence of visible gold
2. True widths estimated at 70% to 80% of core length.
3. Assay grades shown uncapped. A capping factor of 60 g/t Au was used in the 2019 resource estimate 4. For a full listing of drill results from current drilling program click here.

Drilling to date has continued to define and expand almost five high-grade mineralized trends (trend 0, 1, 2, 3, 4), located within a 1,200 m strike respectively to the east of the old O’Brien Mine. Mineralized trends identified bear similarities with structures previously mined at O’Brien down to a depth of 1,100 m (historical production of 587 koz gold grading 15.25 g/t Au).

In addition, the Company has completed an initial 5,700 m exploration program at O’Brien West. In addition to validating geological information from historical drill holes, initial results showcase potential for additional high-grade discoveries in this area. O’Brien West remains open in all directions (along strike and at depth), with results indicating strong depth continuity in lithological units identical to those observed along strike to the west, reaffirming the upside potential from approximately 2.5 km of largely untested prospective ground west of the O’Brien Mine along the prolific Larder-Lake-Cadillac break.

Almost all drilling conducted as part of the ongoing campaign has been within a strike length representing only a small portion of more than 5.2 km of prospective strike that Radisson controls along the Cadillac Break. Given current geological understanding, the ongoing validation of the litho-structural model, the company estimates there is strong potential for additional high-grade gold trends to be discovered along the whole 5.2 km prospective land package on the prolific Larder-Lake Cadillac Break. 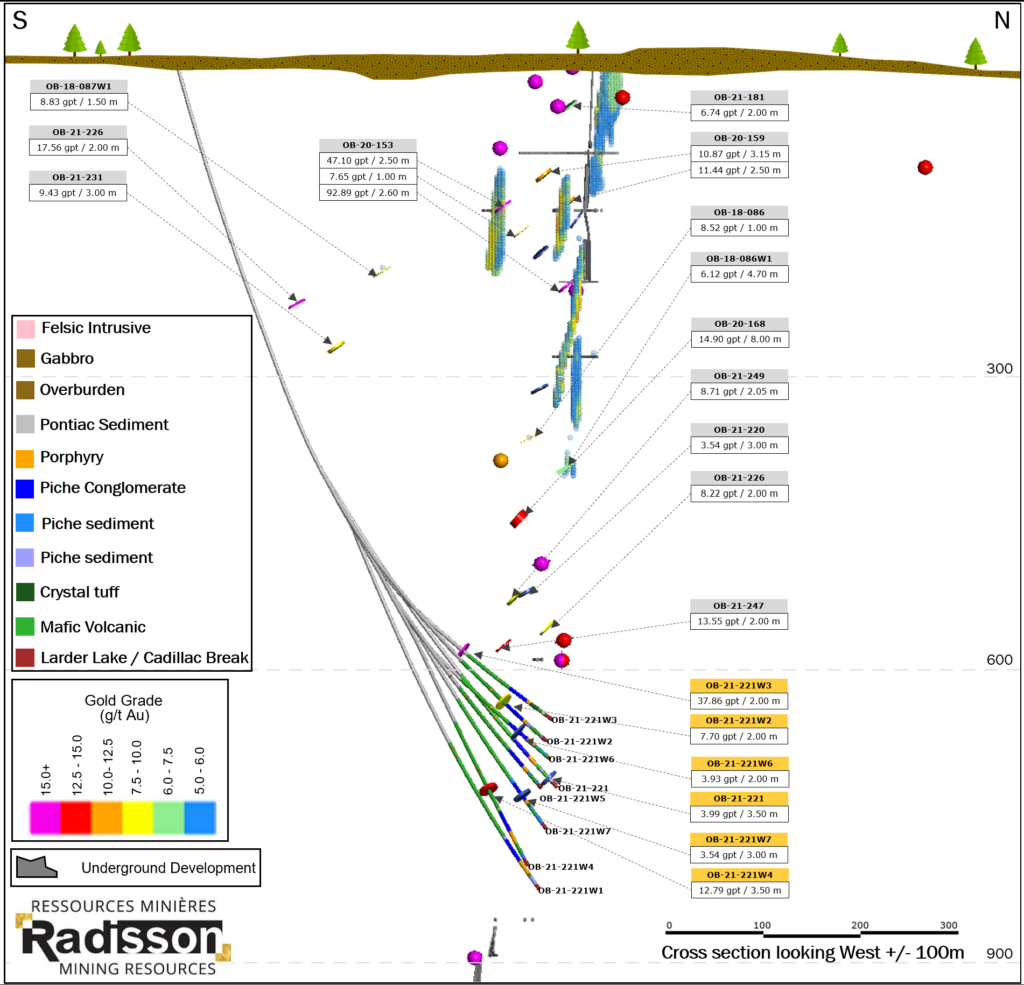 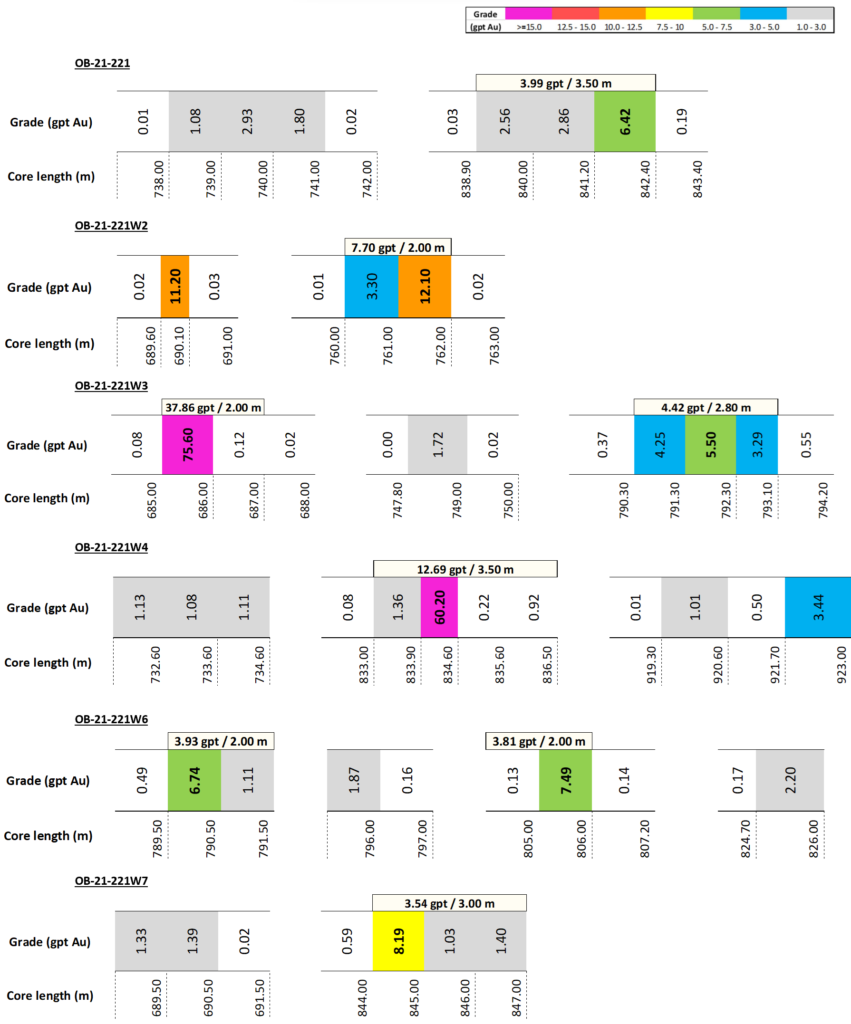 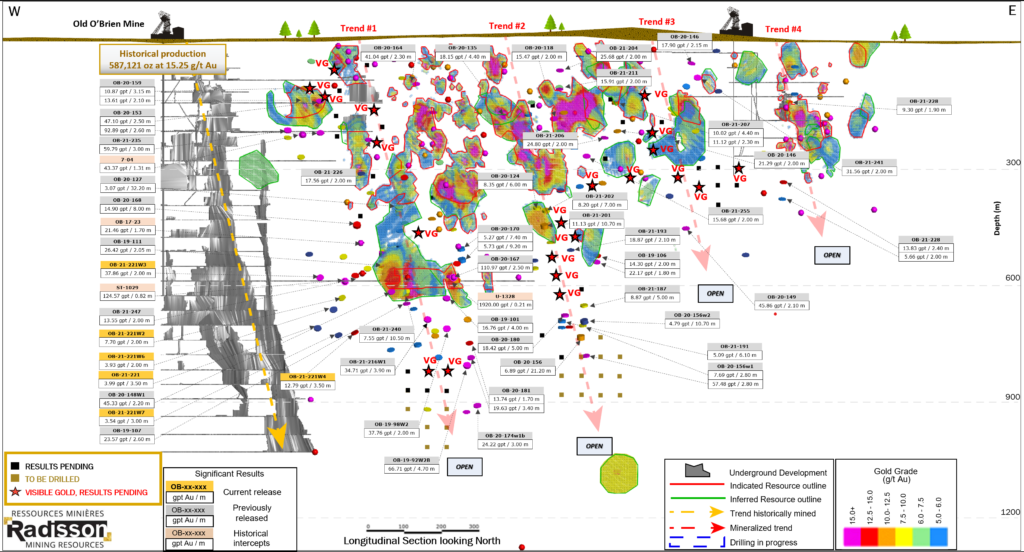 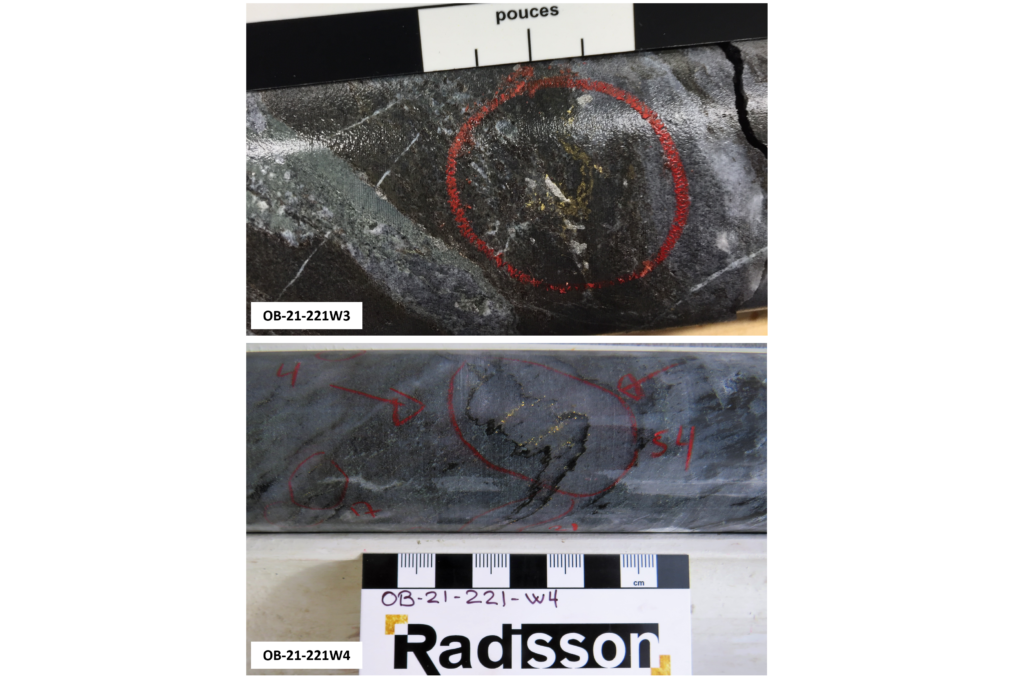 Radisson is a gold exploration company focused on its 100% owned O’Brien project, located in the Bousquet-Cadillac mining camp along the world-renowned Larder-Lake-Cadillac Break in Abitibi, Quebec. The Bousquet-Cadillac mining camp has produced over 21,000,000 ounces of gold over the last 100 years. The project hosts the former O’Brien Mine, considered to have been the Quebec’s highest-grade gold producer during its production (1,197,147 metric tons at 15.25 g/t Au for 587,121 ounces of gold from 1926 to 1957; Kenneth Williamson 3DGeo-Solution, July 2019). For more information on Radisson, visit our website at www.radissonmining.com or contact:

Radisson reports multiple high-grade intercepts including 59.79 g/t over 3.00 m and 13.55 g/t over 2.00 m, expanding mineralization laterally and at depth in the gap between current resources and the old O’Brien Mine

Radisson intersects 38.34 g/t gold over 2.00 m from initial exploration program to the west of the old O’Brien mine