1. VG denotes the presence of visible gold
2. Core length or down hole width. True widths are estimated at 70% to 80% of down hole width. To the extent possible, primary intercepts reflect minimum mining width (1.5 m true width) consistent with assumptions used in the 2019 resource estimate.
3. Assay grades shown uncapped. A capping factor of 60 g/t Au was used in the 2019 resource estimate. 4. Table includes only intercepts that meet 5 g/t Au cut-off and minimum mining width constraints used in the 2019 MRE. For a full listing of drill results from current drilling program click here.

“Drill results continue to increase our confidence in the robust grade and scale potential at the O’Brien Project. Results thus far suggest the potential to double the depth extent of resources in each trend, while also expanding mineralization laterally to the east and west. We are particularly impressed by several broad intercepts along trend #2 that highlight the potential for wider mineralized zones created by the intersection of multiple mineralized veins, between 400 m and 700 m from surface. Observed mineralized widths in these areas appear to be meaningfully higher than the average 2.90 m in currently modeled resource areas, in turn significantly enhancing the high-grade nature of the deposit.

“While the majority of our work program has been focused within 1 km along strike to the east of the historic O’Brien Mine, we believe there is significantly more upside to be unlocked from a prospective land package that includes more than 5 km of strike length along the prolific Cadillac Break. We look forward to a steady stream of news flow as we step out systematically further along strike and deeper beyond the limits of drilling to date, including high-potential targets to the west of the old O’Brien Mine.”, commented Rahul Paul, President and Interim Chief Executive Officer.

Newly released intercepts and previously released intercepts from holes have now traced mineralization down to a vertical depth of 800 m, in this sector where the majority of defined resources are within 400 m from surface. These results also appear to align nicely with an historical intercept of 17.46 g/t over 1.00 m (KW-04-02W1) obtained further down-plunge at a depth of approximately 1,100 m (refer Figure 2 and 3).

Mineralization in trend #2 is currently open for expansion below 800 m as well as laterally to the east and west. Drilling is currently ongoing in this sector with additional results expected in the coming weeks.

Drilling to date has continued to define and expand three high-grade mineralized trends, located approximately 300 m, 600 m and 900 m respectively to the east of the old O’Brien Mine. Mineralized trends identified bear similarities with structures previously mined at O’Brien down to a depth of 1,100 m (historical production of 587 koz grading 15.25 g/t).

Reallocation of responsibilities related to exploration and technical services

Mr. Trudel and Mr. Guivarch will continue to work closely with Ken Williamson who, in his capacity as Senior Advisor, Geology, will continue to play a broader supervisory role with the exploration group, overseeing both the Exploration and Technical Services functions. 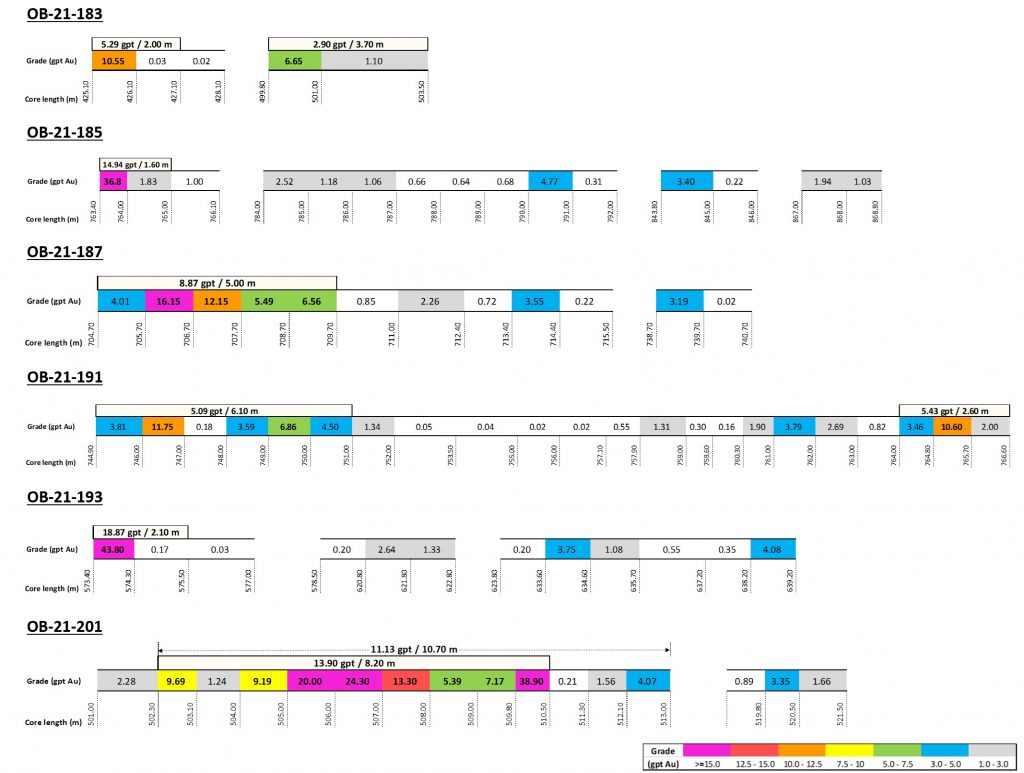 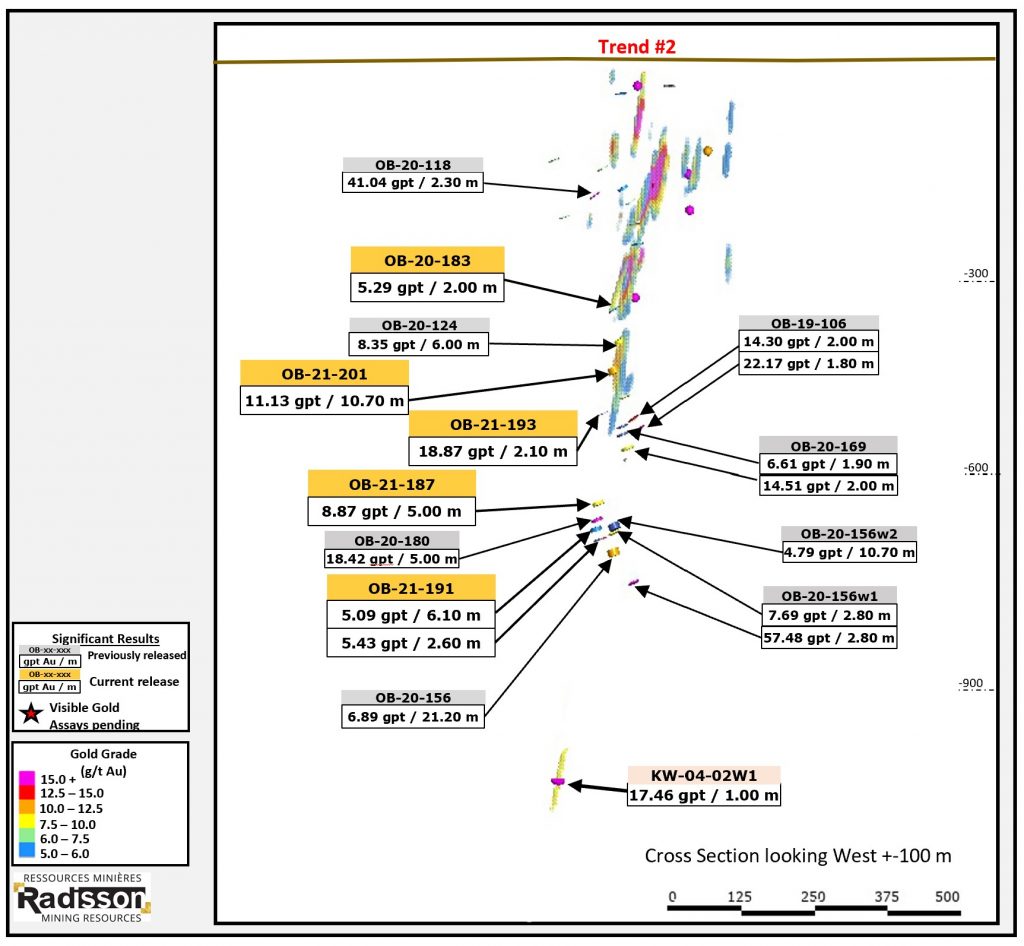 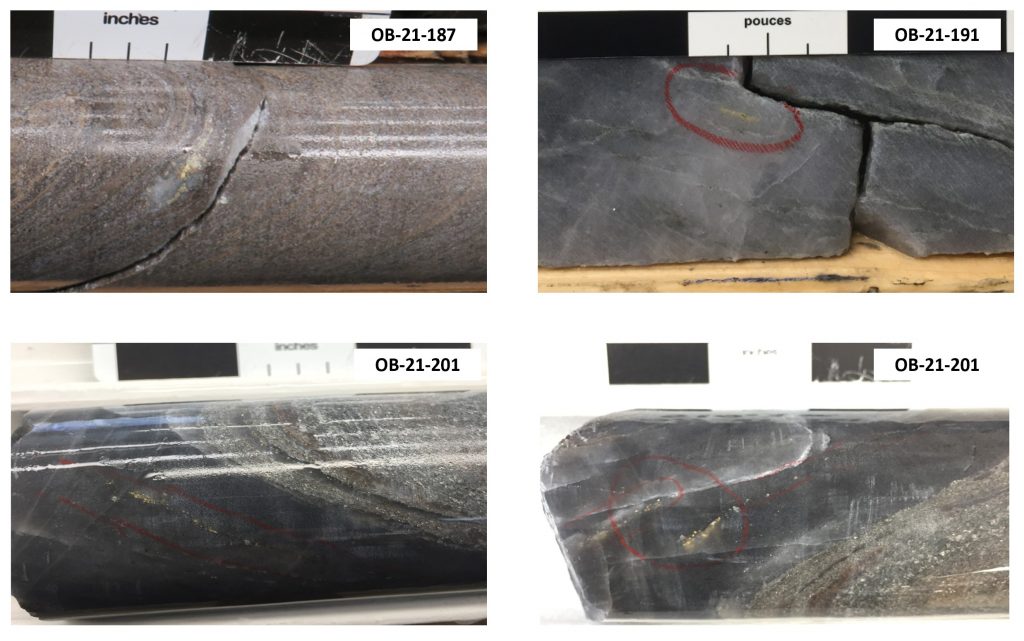 All drill cores in this campaign are NQ in size. Assays were completed on sawn half-cores, with the second half kept for future reference. The samples were analyzed using standard fire assay procedures with Atomic Absorption (AA) finish at ALS Laboratory Ltd, in Val-d’Or, Quebec. Samples yielding a grade higher than 5 g/t Au were analyzed a second time by fire assay with gravimetric finish at the same laboratory. Samples containing visible gold were analyzed with metallic sieve procedure. Standard reference materials, blank samples and duplicates were inserted prior to shipment for quality assurance and quality control (QA/QC) program.

Kenneth Williamson, M.Sc., P.Geo., Senior Advisor, Geology and Nicolas Guivarch, M. Sc., P.Geo., Senior Geologist – Technical Services are the qualified persons pursuant to the requirements of NI 43-101, and have reviewed and approved the technical disclosure in this press release.

Radisson announces results of its Annual General Meeting of Shareholders